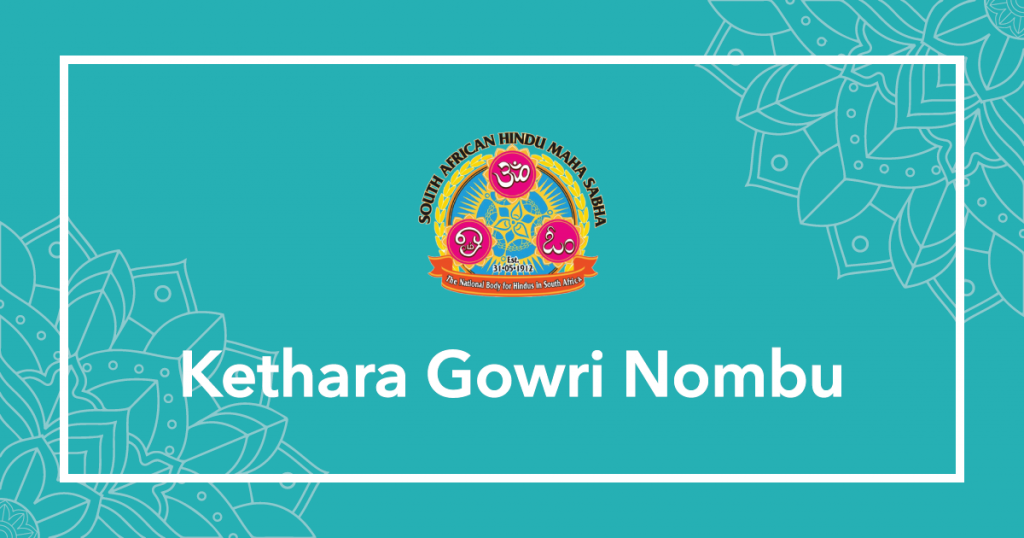 How the date is decided annually
The Kethara Gowri Nombu is observed for twenty one days from Shukla Paksha Astami (eight moonday in its growing phase) and culminates on Deepavali day. The final day for this festival is on Deepavali day.

Significance of the festival to Hinduism
The glories of Kethara Gawri Nombu are stated in several of Hindu religious scriptures like ‘Skanda Purana’. Several Gods and Goddesses also performed this sacred vrat to get desired results. It is believed that a person who devotedly performs the Kethara Gawri Nombu will be bestowed with all the worldly desires and ultimately gain ‘Moksha’ by merging with the Supreme Being. This propitious vratam is therefore observed by all individuals, irrespective of the caste, creed and religious discriminations.

How to observe/practice
Devotees get up at sunrise and take an early bath and pray to Lord Shiva to seek his divine blessings of prosperity and wealth. The puja begins by installing a ‘Kalash’ filled with water. Devotees then make vrata threads by taking 21 fibres with 21 knots in them. This thread is then tied around the Kalash and worshipped with sandalwood paste, rice, flowers and fruits. On Kedara Gauri Vrat day, different varieties of ‘Naivedyam’ is prepared and offered to the Lord. Fasting is an important ritual of the day. One who observes this vrat does not drink or eat anything till the completion of puja. If for any reason, anyone cannot keep complete fast, partial fasting is allowed on Kethara Gawri Nombu. In this, the devotees can eat fruits and dairy products.