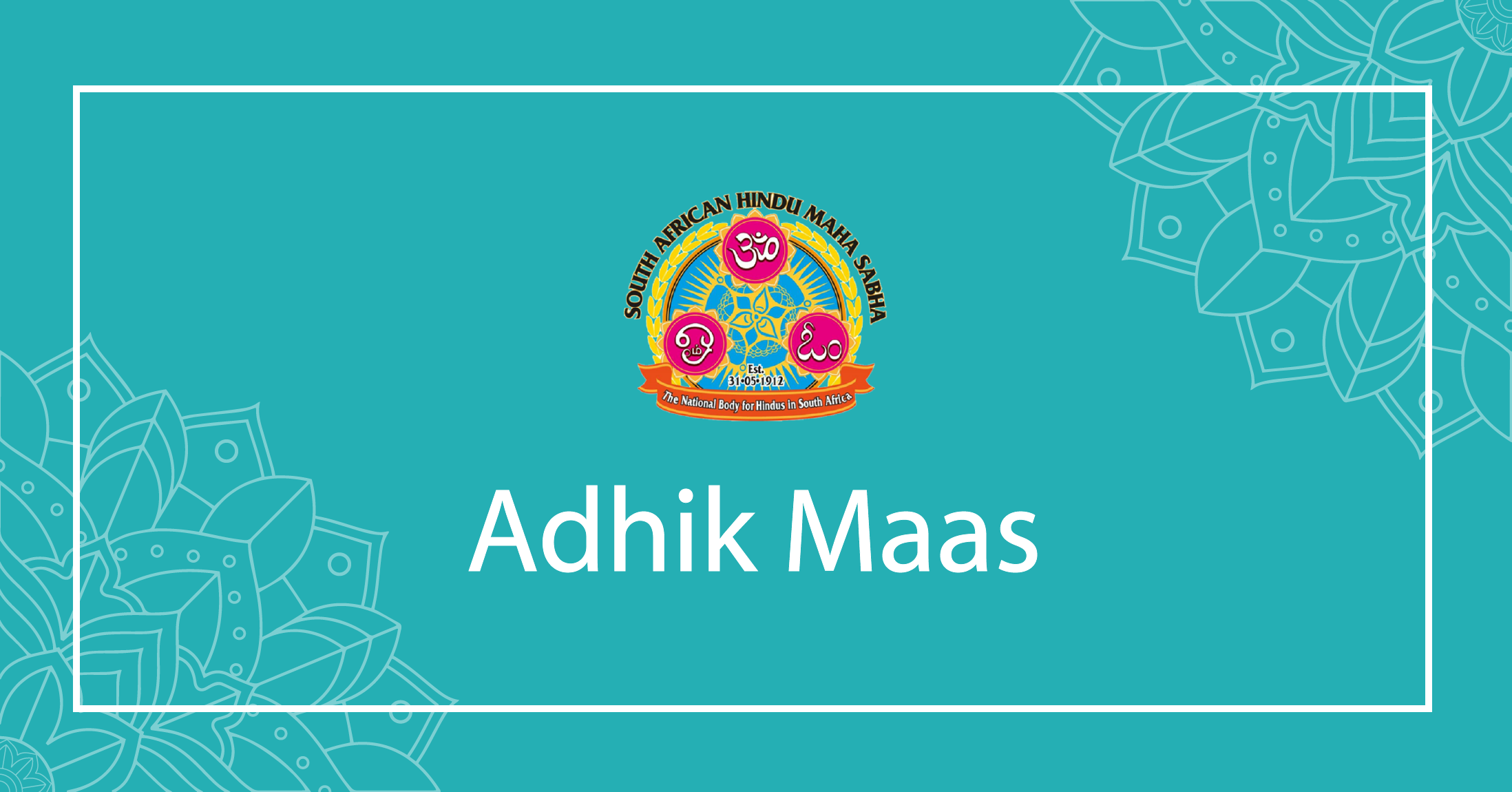 Adhika means “extra,” and Maas means “month”. The Adhika Maas is also referred to as Mala Maas and Puroshottama Maas. It is named Mala Maas because this month is as it were the dirt or refuse of time. Adhika Maas is said to be the month of Vishnu. Each month in the Hindu calendar has a particular deity attached to it. Since Adhika Maas is the 13th month in the year and there was no deity to assign to it, Lord Vishnu decided to attach himself to this month. This is why the 13th month is also referred to as Puroshottama Maas (Vishnu being called Puroñottama). Adhika Mäsa is a sacred month.

The lunisolar calendar from ancient times. There is, however, a difference between a solar and lunar year. The solar year is made up of 365 days and about 6 hours, while the lunar year is made up of 354 days. Thus, both the solar and lunar years have gaps of 11 days, 1 hour, 12 minutes, and 48 seconds (Shastri, 2001:2). The followers of Hindu Dharma resorted to the device of Adhika Maas, or extra lunar month or intercalary month to deal with the gap between the solar and lunar year. The moon takes about 27.3 days to make one complete orbit around the earth. The earth orbits around the sun once every 365.2422 days (= earth’s orbital speed of 29.79 km per second). The earth and the moon in 27.3 days have moved as a system about 1/12 of the way around the sun. This means that from one full moon to the next full moon, the moon must travel 2.2 extra days before it appears again as a full moon, due to the curve of the earth’s orbit around the sun. Ultimately, this creates a variance of 10.87 days a year between a lunar year and a solar year. The additional month is added after every 32.5 months on average to compensate for this difference.

Any act that has a worldly goal is prohibited during Adhika Maas. The Adhika Maas or Puroshottama Maas has been offered to us to engage in nishkaama bhakti (selfless devotion). Adhika Maas occurs so that devotees may de-stress by disengaging from material activities and engaging in activities that offer them ultimate bliss. It is auspicious occasion for every Hindu to venerate God for God’s sake. This period is to re-establish our connection with God. This is certainly an opportune moment for us self-evaluate, self-develop, self-reflect and self-assess.

The performance of daily routine prayer, Japaa (repetition of the Lord’s name), reading of scriptures, attending satsanga, ceremonies relating to birth, and death should continue. One should proceed with acts prescribed on certain occasions. Hence, one should continue with the performance of funerary rites after a relative’s death (if a six-month or one-year ceremony falls in Adhika Maas, it must go ahead since this is a time-bound act). As a rule, one should perform obligatory actions in Adhika Maas, and no rite for securing some object or result is to be performed in Adhika Maas. As a rule, all naimittika (occasional pooja) and poojas performed with a definite material aim in mind are prohibited.